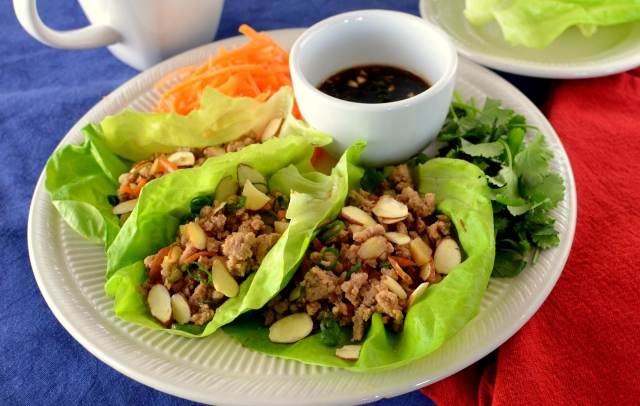 I worked at Chilis a long time ago…like 10 years ago, and one of the dishes they offered was the lettuce wraps. They were AMAZING, but apparently not amazing enough for the general population, as I noticed a few years ago they were no longer a part of the menu. I have also had cheesecake factory’s lettuce wraps, which I thought were good…not awesome. Then there is P.F. Chang’s (or Pei Wei’s) lettuce wraps…very good, but a little salty for me. I am sure there are other amazing lettuce wrap to be found around the globe, but for celiacs, or anyone with gluten intolerance, the soy (and other possible glutinous ingredients) will cause a serious reaction. The hardest part of Asian cuisine is the gluten laden sauces. So, here I find myself making my own. Something I have done for years. (FYI-P.F. Chang’s does have lettuce wraps on their gluten free menu)

These lettuce wraps are gluten free, as well as low carb, and fairly good for you. You can even substitute the gluten free soy (or tamari) for a low sodium one, if you want to cut back on salt.

While my husband and I were eating these, he said to me, “babe, I am so proud of you for doing something so awesome after being kicked in the gut.” I didn’t really understand what he was saying at first, then I realized that he was referring to me starting a food blog after the frustration and devastation of a celiac diagnoses. Yea, I think “kicked in the gut” is a great description. And, yes, I am awesome.  🙂

1.25 lb package of ground turkey (I use Jennie-O because it’s GF)

1 head lettuce- bosten lettuce forms nice cups, however, iceberg is much crisper, but not as classy

Mix together your GF soy, rice vinegar, agave, and sesame oil in bowl. Set aside.

Cook the turkey in saucepan until almost browned. Pour out extra liquid. Add in carrots, mushrooms, water chestnuts, garlic, green onions, ginger and the sauce mixture. Mix together well and let simmer a few minutes. Mix cornstarch with a few teaspoons of hot water and mix. Add to saucepan. Continue to let simmer another 5 minutes, or until vegetables are softened. Remove from heat. The longer you let it rest, the better the flavor becomes.

Mix all ingredients together and whisk. Divide into smaller ramekins or bowls for dipping. 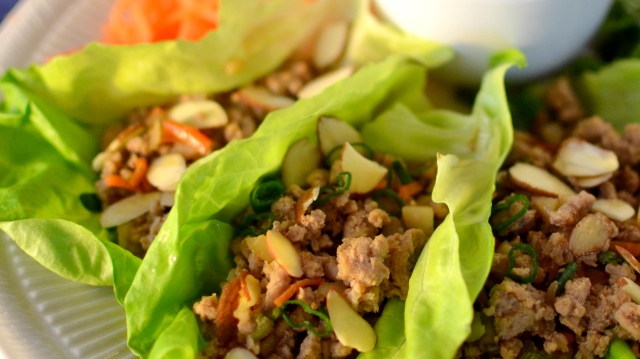 Hi I'm Crysty! Thanks for stopping by! Check out all of my awesome gluten free recipes!